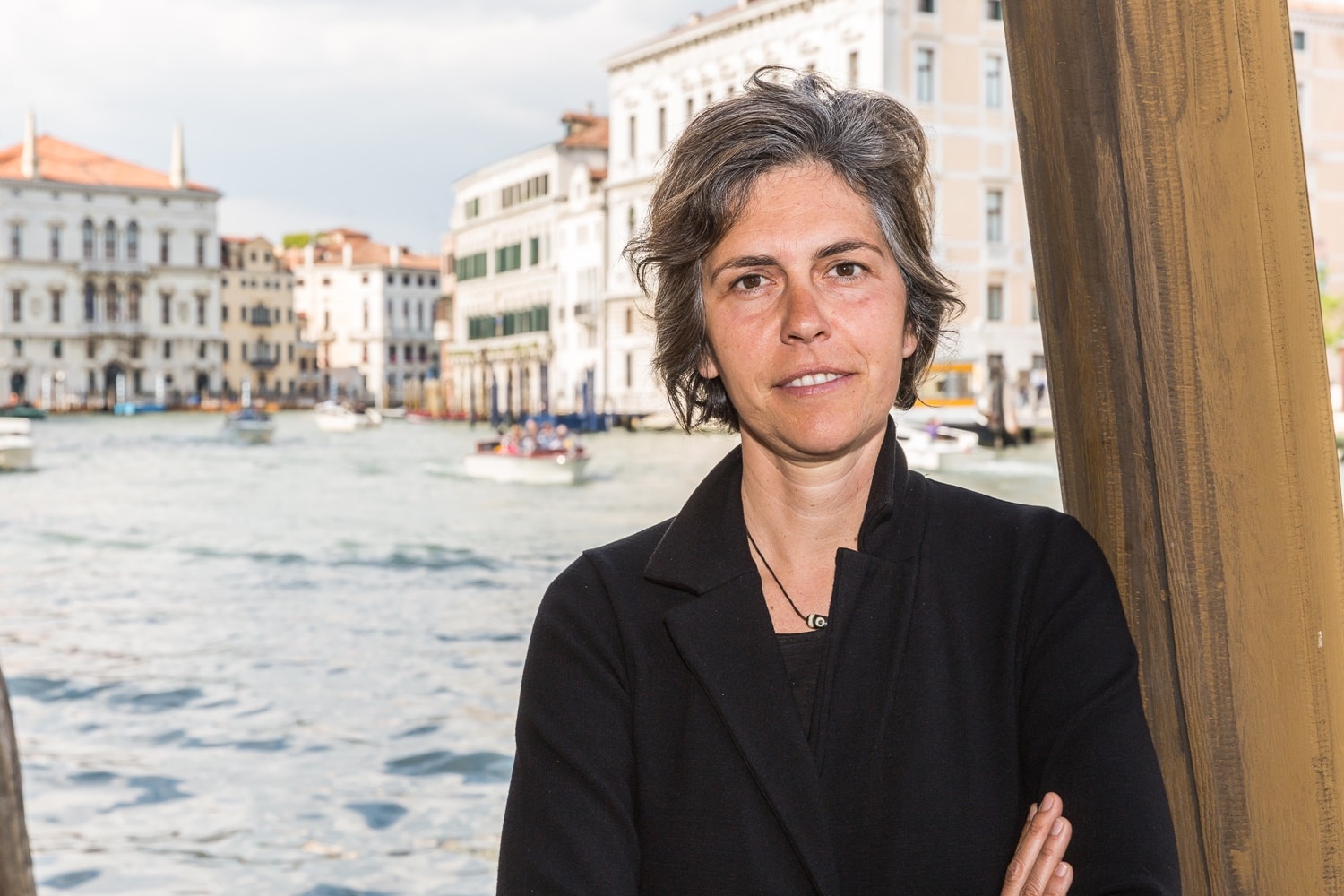 Hi! I’m Silvia. Born and raised in Venice, I consider myself a REAL Venetian – one of the few!

Art is my life. I studied Japanese culture and language and, after spending time in Tokyo, chose to return to live in my unique and fascinating hometown where every day brings countless new discoveries and pleasures. Becoming a licensed tour guide in English and Japanese has given me the opportunity of passing on my knowledge and sharing my passion for Venice with others, while in my spare time you can find me hiking in the spectacular Dolomites, hanging out with my dog Rufus, or idly losing myself in the colours of beautiful Venetian paintings.

Just a short note to thank you for all you did to make our trip so spectacular. The apartment was glorious! You assistance to answer questions and make arrangements was perfect. And Silvia, dear Silvia, was wonderful. We could have spent the entire day with her. Her enthusiasm and love for her city was clear. Her knowledge was deep. Just wonderful!

Do not think of visiting Venice without putting yourselves into the hands of Silvia for at least half a day! During a recent holiday in Venice, our family, all serious history, culture, and culinary buffs, spent a fantastic half day with Silvia!! She brought the Doge’s Palace and St Mark’s Basilica to life for us in a way which we, notwithstanding plenty of reading and preparation, could never have hoped to approach. Silvia is a Venetian with a deep and passionate knowledge of her city’s history and legacy; she combines this deep knowledge with an ability to take you through a room replete with legendary paintings and decorative arts and then focus on the few items that give depth and meaning to the entire experience. Rather than feeling overwhelmed, you come out of the room eager to learn more. Over the course of fifty years of global exploring, I can remember few guides who helped their charges so rapidly understand what is so special about the wonders they are discovering. Silvia’s English is fluent, and the breadth of her knowledge of Venice’s history and arts is awesome. Combined with a friendly and welcoming demeanor (our family is part French - Napoleon was NO friend to Venice!!! - yet this never perturbed her), Sylvia’s knowledge and erudition will bring out so much in Venice that the casual visitor will miss. Plus, she guided us to the most wonderful trattoria, where the early lunch crowd is mostly comprised of gondolier, carabinieri, and other locals, and where the food was simple yet exquisite! So do yourself a HUGE favor if you’re visiting Venice: ask Sylvia to share with you some of her knowledge of this most wonderful of cities…

Discover the story of this most incredible city through its most famous monuments! …

…The Church of St. Mark’s – a magical mix of Eastern and Western art, where the body of the eponymous saint has lain for a thousand years, and the Doge’s Palace – home to one of the greatest collections of Venetian masterpieces and where we’ll learn about the inner workings of the oldest Republic in the world.

We’ll start with a short introduction to the Piazza and its history while admiring its incredible monuments such as the Clock Tower, the Procuratorie and the Bell Tower.

Later we’ll visit the Basilica of St Mark’s to marvel at its amazing medieval mosaics plus much, much more. And during summer we’ll skip the line!

After the Basilica, we’ll move on to the Doge’s Palace, the heart of ancient Venetian political life and a veritable treasure chest of art and history.

We’ll also see the Armoury, the state rooms and the dark, forbidding prison cells reached by crossing the famous Bridge of Sighs where we’ll discover the sombre reason behind its strange name…

Walking Tour plus Water Taxi on the Grand Canal

La Serenissima – a city of water with a ‘dual personality’ best experienced from its canals!

During this tour we’ll visit the highlights of Venice – St. Mark’s Square and Basilica, the Doge’s Palace, the Bridge of Sighs, Campo Santi Giovanni e Paolo and Rialto – and later take a relaxing water taxi trip through its charming waterways.

Our tour will start in St. Mark’s Square, the heart of Venice and, in the shadow of the winged lion, we’ll learn about the history of the oldest Republic in the world.

After an exciting visit to the Basilica and admiring its incredible golden mosaics – from April to October we’ll skip the line – we’ll begin our discovery of the much sought after REAL Venice, crossing picturesque bridges and strolling through shaded narrow streets.

We’ll see the famous Bridge of Sighs and discover the sombre reason behind its strange name; we’ll head off to the Castello district, visiting the impressive Campo Santa Maria Formosa and its beautiful architecture.

At the Rialto Bridge, we’ll admire one of the most dazzling vistas in the world and visit the ancient market area – the oldest part of the city and birthplace of modern day banking – and round off the tour by taking a leisurely water taxi ride along the legendary Grand Canal and, if you wish, the narrower waterways well off the beaten track.

Tour of the Islands

Leave the crowds behind on a trip through the Venetian Lagoon and see what ‘Venice’ looked like before it became the city we know today.

Our first stop will take us to the island of Murano where Venice’s furnaces were transferred in 1291. We’ll visit a glass factory, see the glassmakers in action and discover more about this very ancient art.

Next stop will be the island of Torcello – dating back to the 7th century AD and the earliest Roman settlement in the Lagoon. Drift back in time as we make our way to the golden mosaics and Greek marble columns of Cathedral of Santa Maria Assunta – built in 639 AD – and its recently restored bell tower dating from the 11th century AD.

And crossing the canal we’ll arrive at Burano – a very different island to the one we leave behind.  Famous since the 15th century for its exquisite lace which was a favourite with the aristocracy of Europe, Burano today is an island of fishermen, rainbow-hued houses and a special laid-back atmosphere all of its own.

Strolling the streets of this particular neighbourhood we’ll escape the tourist crowds and enjoy a lesser-known Venice, but perhaps even more charming, a Venice frequented by Venetians.

The itinerary also includes a visit to the Church of Madonna dell’Orto and the Jewish Ghetto – founded in 1516 and to this day the social and religious centre of Venetian Jewish community life.

A Walk through the ‘Sestieri’ (Districts) of Dorsoduro, Santa Croce and San Polo

This itinerary winds along the ‘calli’ and ‘campi’ of what are perhaps Venice’s liveliest neighbourhoods.

Starting from the sunny Fondamenta delle Zattere, we’ll see a nearby ‘squero’ – a traditional boatyard where gondolas and other wooden boats are built – and cross Campo Santa Margherita, popular meeting spot for Venice’s youth and the centre of university life.

The walk will take us to the Church of the Frari – a splendid example of Venetian Gothic architecture – and through Campo San Giacomo dell’Orio, a lively square full of charm, local flavour and ancient mystery.

Passing through the characterful Carampane neighbourhood, which in ancient times was reserved for courtesans and brothels, we’ll finally arrive at Rialto – once the commercial and financial heart of ‘La Serenissima’ and today the site of the city’s main fish, fruit and vegetable markets.

Venice Under The Stars

History and art by night, off the tourist trail…

Join me on a late-night walking tour of the city and glimpse a side of Venice the day-trippers never see!

With your senses heightened and few sounds other than the gentle echo of footsteps along the calli, the soft lap of the water against ancient stones, and the distant, muffled chug of the night-time vaporetti, feel the character of the city shift dramatically in the dark.

And not only at St. Mark’s Square, the Doge’s Palace and the illustrious Grand Canal palazzi, but also in the empty calli and campi so often busy by day.

Let’s experience Venice in a fun and different way!

Whether you’re young in years or simply young at heart, come explore the city on one of my amazing treasure hunts.

With your family, friends, as part of a group large or small (minimum 4 people), you’ll become navigators, photographers and hunters of the unusual as you discover facets of a hidden Venice that you never knew were there.

And at the end of the hunt your final scores will be revealed and the winners awarded prizes to celebrate their success!

Venice is famous for its old osterie and bacari (taverns and bars) where locals meet for aperitivi and to catch up on the day’s news.

Join me on a visit to some of the most authentic in the city where the tradition of enjoying cicchetti (tapas) and spritz or ombre (small glasses of wine) in the unique atmosphere of Venice is truly alive and kicking, and held very dear by those who know it well.

I’ll give you an insight into Venetian cuisine and culture while we relax and chill out with great finger food and wine, and also touch on the ways in which Venice has evolved into one of the most celebrated cities of all time.

Venice is SO different – magical, extraordinary, a thrill to explore… and one of the best cities in the world to visit with your kids.

Take a look around you… a stroll in each direction is sure to lead to some hidden historical or cultural gems which come together to make Venice a real treasure trove of delights.

From the spooky prison within the magnificent Doge’s Palace, to the former house of legendary Venetian explorer Marco Polo tucked away in Cannaregio…

… I’ll accompany you and your children as we venture off the beaten path to uncover legends, curiosities and tales of La Serenissima… and also of the unexpected nooks and crannies we’ll unearth along the way.

Designed to entertain and engage your children (and you too!)

Enquire about this Service